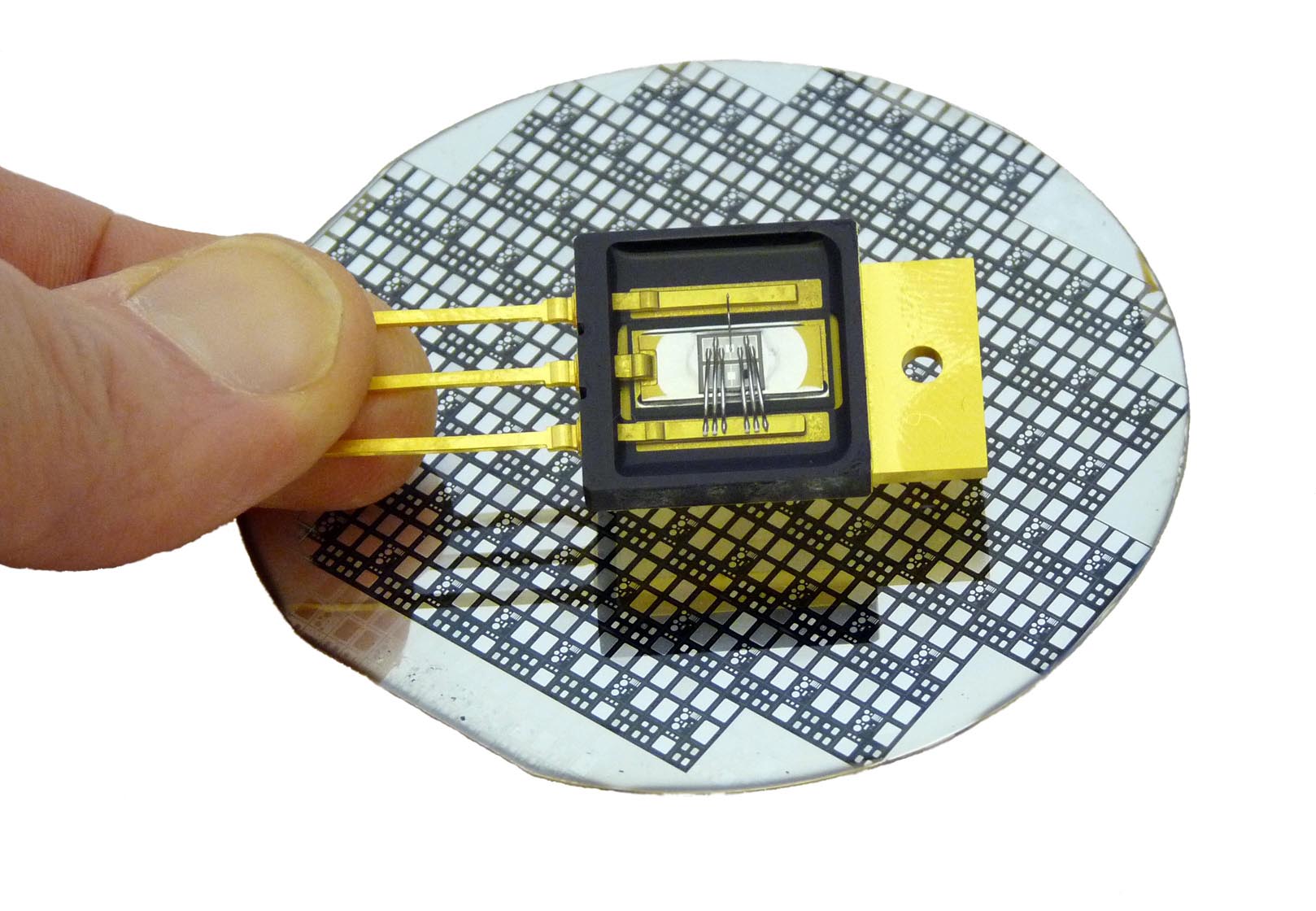 As detailed in the discussion of Power Electronics converter design is a complex system of tradeoffs between performance, efficiency, size, reliability, and other metrics. When selecting power semiconductor devices to implement a converter, the characteristics of each device need to be considered, including how they will impact the overall system.

The performance metrics of a power converter (e.g. size/weight, cost, efficiency, reliability) are fundamentally determined by its implementation, including device selection, converter topology, layout and interconnection, sensing, control, modulation, and thermal. The mathematical relationship linking implementation to performance is complex and highly nonlinear. The figures below examine the simplified case of altering the semiconductor area of a simple VDMOS power transistor, as detailed in the power semiconductor devices page. The specific on-resistance and drain-to-source capacitance of the transistor are limited by the blocking voltage \(V_{BV}\) of the device, and the material properties. Altering the device area can result in lower on-resistance \(R_{on}\), but always at the expense of increased capacitance \(C_{ds}\).

In any given power converter, increased on-resistance results in increase conduction loss \(P_{cond}\), whereas larger \(C_{ds}\) increases switching loss \(P_{sw}\). We can thus map from the "design space" of power transistors possible to fabricate with the material, to the "performance space" of power losses. Different device designs will results in different magnitudes of conduction and switching losses, but an optimal can be found which minimizes the total losses.

The inherent material characteristics of Wide Bandgap Semiconductors make them more suitable for use in power electronics. As one example, superior carrier mobility and critical electric field allow devices to be fabricated with more favorable tradeoff between \(R_{on}\) and \(C_{ds}\). Through the same mapping from design to performance spaces, this results in a new optimal design which exceeds the performance possible with silicon devices.

By improving the semiconductor devices (left), a net increase in performance can be obtained in the power converter (right). Previous curves and surfaces are in grey.

In reality, \(R_{on}\) and \(C_{ds}\) are just two of many parameters important in converter design, and power loss is only one dimension of a multidimensional performance space. However, the main concept of the previous example holds true in comprehensive converter design. Wide Bandgap Semiconductors expand the feasible design space, and through a complex mapping function result in an increased and improved performance space.

Wide Bandgap materials are a large class of different materials, each with their own merits. However, common to all materials is a significantly larger (often 2-3x larger) bandgap than silicon. Some relevant thermal and electrical parameters of various semiconductor materials are summarized in the table below.


The current state of technological readiness varies for of each of these materials. Silicon, as the incumbent technology, has nearly 70 years of prior development. Though incremental gains are still continuing in silicon power devices, the technology is very mature; as such, it is low-cost and has well-known reliability and performance limits. Diamond, on the other extreme, exhibits excellent material properties, but technologies for fabricating diamond semiconductor are very immature. A discussion of some of the WBG materials is available in the tabs below.

Silicon has been used as a semiconductor since the early 1900s, largely as diodes for RF applications in the early days. In the late 1940s and early 1950s, the first silicon transistors the first public demonstrations of silicon transistor amplifiers occurred at AT&T's Bell Labs. Simultaneously, the first power thyristor was developed at General Electric. In the late 1950s, the first silicon integrated circuits paved the way for the rapid proliferation of electronic technology. It was not until the 1980s that power MOSFETs and IGBTs became widely available, thereby enabling power conversion as we know it today.

Silicon is a "group 4" element on the periodic table, with four valence electrons. When fabricated in bulk, atoms in pure, monocrystalline silicon wafers form four covalent bonds with neighboring atoms to fill their valence shell. When group 3 (three valence electrons) or group 5 (five valence electrons) atoms are introduced into the silicon lattice through doping, a free hole or electron, respectively, will be produced. Boron, aluminum, and gallium are commonly used acceptor dopants, and phosphorus, arsenic, and antimony are the most common donors.

A typical vertical doubly-diffused power MOSFET (VDMOS) structure is shown at left. This structure is analyzed from an circuit perspective in the switches section of the power electronics page and from a semiconductor physics perspective on the power semiconductors page, focusing on the expitaxial "drift" region. The tall, \(n^-\) region is used to build up a maximum blocking voltage before breakdown, and many unit cells are paralleled to create high current conduction capability. For high voltage devices, this structure is well-modeled using the Schottky diode analogue. Two more recent structures are shown in the figures below.

The first structure, known as a superjunction device, is created by extending the \(p^+\) body wells into deeper, \(p\)-wells. In this structure, as the device blocks larger drain-to-source voltage, the depletion of the epitaxial region expands in two dimensions, rather than one. In contrast to the electric field in a standard VDMOS which has a triangular electric field in the drift region, a well-designed superjunction device can exhibit a flat, rectangular electric field. This allows a larger voltage to be blocked before the internal electric field reached \(E_{crit}\). Alternately, a smaller device can be used to achieve the same blocking voltage and on-resistance, resulting in lower parasitic capacitances. Superjunction devices exhibit superior switching performance at voltages above 100's of volts, but due to the larger \(p-n\) junction area, often exhibit significantly more reverse recovery charge of the internal body diode.

The second structure, known as a trenchFET, uses a deep recessed gate to obtain stronger inversion in the channel when the FET is turned on. A "U"-shaped gate recess is shown, but the gate is sometimes "V", or "W" shaped. TrenchFETs are commonly used in lower voltage applications, where the channel resistance is comparable to or greater than the drift region resistance. They exhibit lower on-resistance, but higher gate charge than VDMOS devices. "V" and "W" trench shapes help to reduce the gate-to-drain capacitance of the device.

Gallium Arsenide (GaAs) is a III-V semiconductor (i.e. a semiconductor made from one group 3 and one group 5 element). Its high electron mobility and dielectric constant have made it well-suited to very high-speed applications. GaAs is commonly used in Microwave Monolithic Integrated Circuits (MMICs) to implement amplifiers in the hundreds of gigahertz.

The critical electric field of GaAs is only slightly higher than Si, and its thermal conductivity is significantly lower. As such, GaAs has received less attention than GaN for power electronics applications, but is similarly suited to low-power very high frequency switching applications. There is some commercial interest in GaAs power devices [4] but commercial offerings currently remain limited to devices targeted at implementation in RF amplifiers, rather than switching power supplies.

GaAs devices are currently implemented as lateral HEMTs, rather than vertical MOSFETs, as detailed further in the GaN tab.

Among currently commercialized WBG materials, SiC has the highest thermal conductivity and melting point, making it suitable for high temperature operation. Silicon power devices typically begin to break down when operated at temperatures above 125℃, whereas functional SiC integrated circuits have been tested in excess of 300℃.

SiC FETs and diodes are predominatley available at 900 V and above. At these voltages, FET performance is dominated by drift region characteristics, allowing the inherent material characteristics to shine. At lower voltages, where drift region resistance is less dominant, device performance is largely dictated by structure and process details; silicon retains the advantage due to technological maturity in processing and fabrications despite the material shortcomings.

Defect-free, monocrystalline SiC wafers are necessary for successful fabrication of electronic devices. SiC can be doped with similar atoms as used in silicon, making the fabrication of SiC power devices well suited to existing silicon fabs with some equipment modification or extension. However, material properties of SiC make the fabrication of high quality wafers difficult using standard approaches.

Currently, SiC wafers are produced mostly in wafer sizes of 4", with 6" wafers slowly taking over and 8" wafers on the horizon. This scaling up of wafer size is critical for the technology: larger wafers allow more devices to be produced from a single fabrication run and thereby bring down the total cost to produce each device. For comparison, wafers up to 12" are common in silicon devices. Additionally, SiC wafers constitute about 20% of the total cost to produce a SiC power device, whereas wafer costs are only about 5% in silicon devices.

SiC is a notoriously hard material to machine due to its hardness. SiC (in purities well below those needed for electronic devices) has been commonly used for many years to produce tips on saw blades and drill bits because of this. Diamond and Boron Carbide are two of relatively few materials with higher hardness that can be used to mechanically polish or grind SiC.

Though the material characteristics of GaN show a possibility for improved performance when implemented as a traditional vertical power MOSFET, the state of technology for GaN wafer fabrication is relatively immature. High quality GaN wafers are not widely available, and the process for reliably doping GaN has not yet yielded commercially-viable results. However, GaN devices are commercially available using alternative device structures which necessitate neither GaN substrates nor doping of the material.

Shown at right is a typical lateral GaN High Electron Mobility Transistor (HEMT), grown on a silicon substrate. The device structure makes use of a two-degree electron gas (2DEG) which forms at the interface between layers of GaN and Aluminum-GaN (AlGaN). This 2DEG is a very high conductivity plasma. This 2DEG layer is inherently very conductive, and must be altered in order to allow the device to shut off. This can be achieved by e.g. applying a negative gate voltage, which creates a field which disperses free carriers underneath. Thus, lateral GaN HEMTs are inherently depletion-mode devices (i.e. normally-on), rather than enhancement-mode (i.e. normally off) devices like MOSFETs. Depletion-mode devices present issues in modern power electronics topologies due to the device appearing as a short during abnormal operation, such as startup when the gate voltage has not yet been established.

Commercially available GaN devices predominately use Si wafers as substrate for reduced cost. SiC and sapphire wafers have been used to increase device performance at the expense of cost.

Because of their lateral structure, GaN devices are well suited to monolithic integration. Initial commercial devices have been produced with multiple power devices on chip, or with gate drivers integrated onto the same die as the power device.

At present, the lateral structure of GaN devices limits commercial viability to applications requiring blocking voltage below 700 V. Research efforts focusing on reliable GaN wafer growth and vertical device fabrication show promise, but have yet to be commercialized.

Diamond is, perhaps, the quintessential WBG material. Inherent material characteristics predict multiple orders-of-magnitude improvement in device switching and conduction performance when compared to any other material, sometimes as much as a five million times improvement over silicon [2]. However, difficulties in the fabrication of high-quality SiC wafers are mirrored and amplified in the processing and fabrication of diamond substrates. At present, commercial production of diamond electronics is still on the distant horizon.

At present, for power electronics applications, silicon is the clear incumbent with lateral GaN and vertical SiC devices beginning to slowly chip away at its dominance from each end. However, commercial use of SiC and GaN power devices remains minimal. In large part, the slowed adoption of these technologies can be attributed to both their relatively high cost, and as-yet unproven field reliability. Though studies have shown excellent reliability, and have proven that in some applications the additional cost of the power devices is offset by reduced system cost accrued through their superior performance, these limited results often pale in comparison to the decades of proven application of silicon power MOSFETs.