Due to the continuously increasing power demand and the requirement of clean energy, renewable energy sources and the related topics have drawn more attention. With capacity nearly 75 GW at the end of 2015, the U.S. Department of Energy has envisioned that wind power will supply 20% of all U.S. electricity by 2030. Solar photovoltaic (PV) generation has also been growing rapidly: over 26 GW of capacity has been installed, and 35 GWh of energy has been produced in the year of 2015.

Typically, the variable frequency ac power generated by the wind turbines and dc power generated by the solar panels cannot be connected to the power system directly. Power electronics converters are usually required to transfer the generated power to the power grid. Due to the flexible controllability, the power converters can not only continuously supply the loads, but also provide ancillary services to the grid, including reactive power-voltage support, and short time frequency support, which enables the stable operation of the future power system. Integration of renewable energy sources into power grids may suffer from resonance and instability issues due to the interaction among multiple renewable interface converters and with the grid. Therefore, the proper controller design of renewable interface converters is important for the grid harmonic stability and power quality. 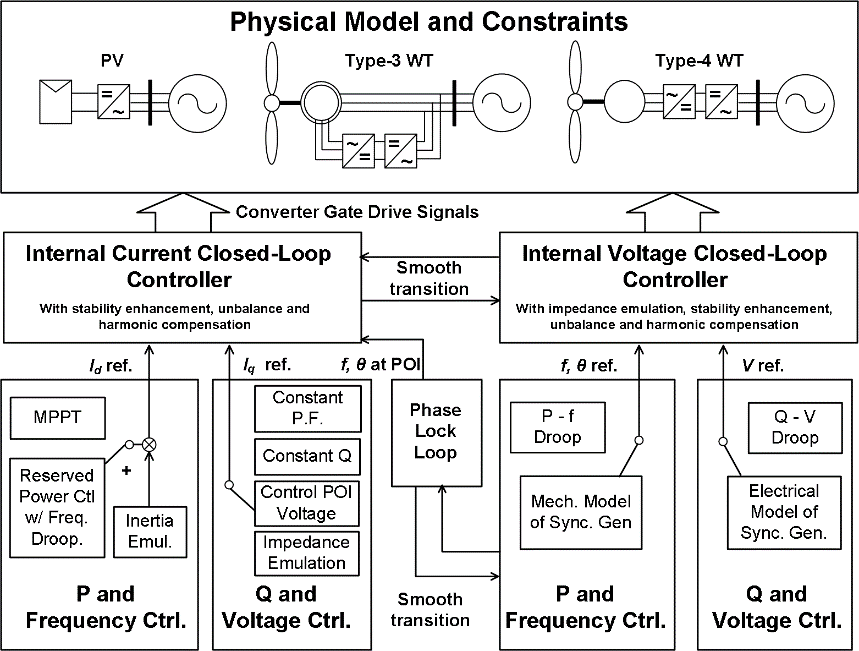 This project develops the power electronics interfaces with renewable energy sources and control strategies needed for active voltage and frequency regulation, as shown in Fig. 1. Using the developed model and control strategies, capabilities of these renewable energy sources with interface converters are investigated, including active and reactive power, voltage, inertia, and impedance characteristics.

The project also develops the stability criterion and design methodology of renewable interface converters to guarantee the stable operation of power systems with high penetration of renewable energy sources, such as a grid-connected radial-line PV system with multiple PV inverters. The harmonic stability of grid-integrated renewable energy systems is analyzed using the impedance-based stability criteria. Based on the stability analysis, the converter controller parameters are designed to ensure the system stability without harmonic resonance problems.

The wide band gap (WBG) devices allow higher voltage ratings, higher efficiencies and higher switching frequencies of the power electronics interface converters. A higher switching frequency reduces the delay time in the control loop and enables a higher control bandwidth of interface converters, which enhances the converter abilities of resonance damping and harmonics mitigation to improve the harmonic stability and power quality of the power grid.