In July of 2014, Google announced the Little Box Challenge, an open, worldwide competition to design the smallest 2 kVA single phase inverter possible. This call-to-action challenged universities, industry, and unaffiliated power electronics engineers across the globe to apply new technologies to revolutionize the achievable power density of inverters for household applications. In the process, new approaches to age-old problems of miniaturization, thermal systems design, DC/AC energy decoupling, and electromagnetic compliance were developed and demonstrated by hundreds of entrants, with the top 18 performers (including the team from UTK) selected as finalists. 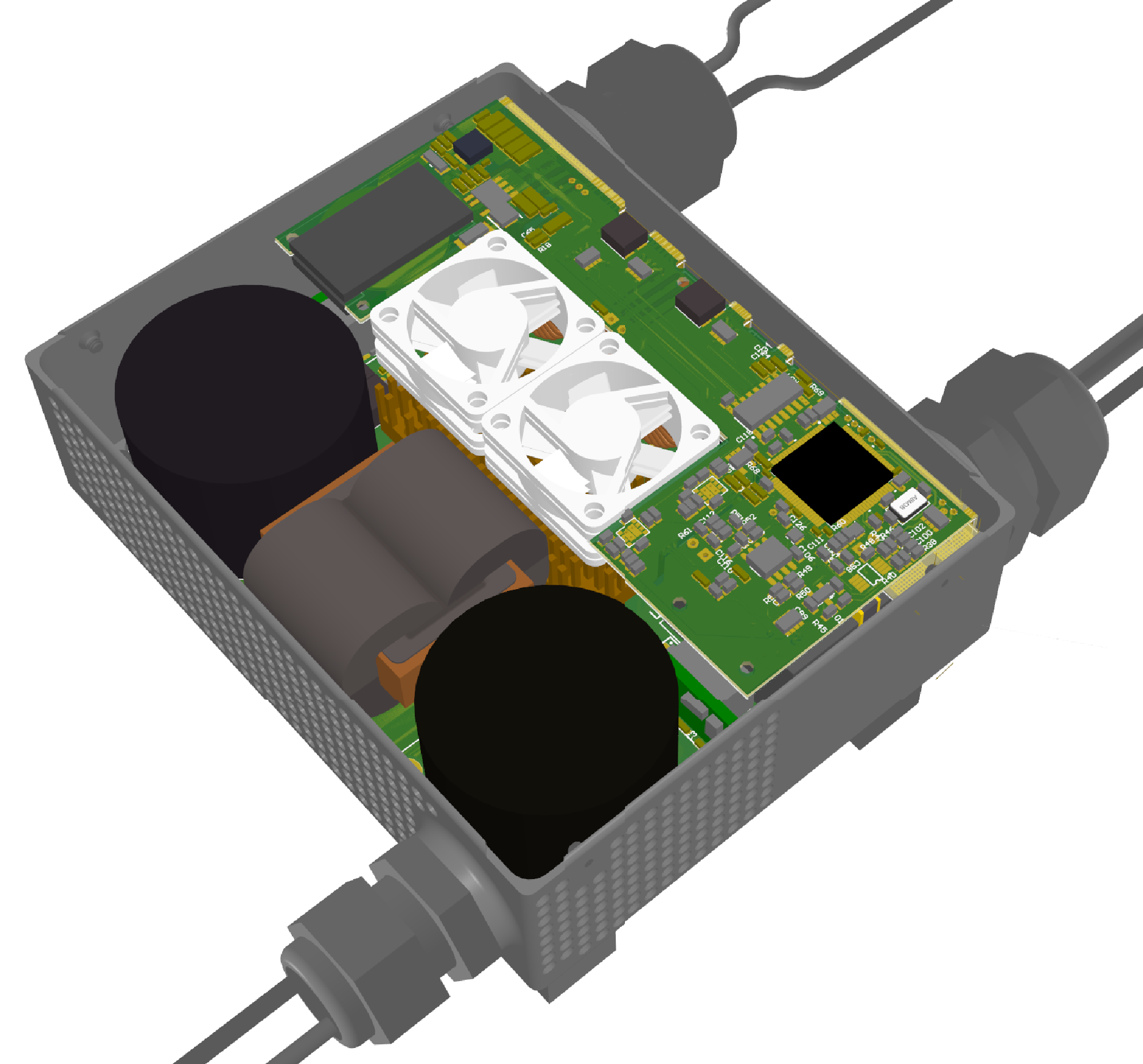 Rendering of the final UTK entry to the competition

The University of Tennessee (UTK) in partnership with the Electric Power Research Institute (EPRI) previously built a 2 kVA single-phase inverter with ultra-high power density (102 W/in3) using WBG devices. The inverter power stage and overall system size were minimized through a multi-faceted approach. During the design stage of the project, many different approaches were analyzed through complete paper designs to compare total displacement volume. This included alternate energy storage implementations, converter topologies, switching frequencies, and device and passive materials. However, complete in-house static and switching performance characterization of multiple WBG devices, including thermal variations in key parameters, allowed for the miniaturization of the final design.

Building up on the 2kVA single phase inverter previously developed for the contest, we are developing new approaches that can be implemented to further improve the current topology.

The new capabilities afforded by WBG devices are key to the miniaturization and thermal performance of high density inverters. Looking through the finalists in the challenge, a clear majority, including the UTK team, utilized WBG devices in their design. These devices provided a number of advantageous design tradeoffs in addition to their base superior switching characteristics. Because WBG devices are new, and targeted at emerging high switching speed applications, many are available with minimal or no packaging at all. Silicon devices are often hindered by standard packages, which are beneficial for allowing multi-sourcing in commercial applications, but introduce additional thermal and electrical parasitics, and further increase the volume of the system. The minimal packaged size of the employed GaN devices allowed for a dense power stage layout, using a single custom-machined pin-fin heatsink. Further, the high (200 kHz) effective switching frequency made possible by the lower switching losses of GaN devices allowed for a reduction in the size of passives in the power stage and EMI filter, which occupied approximately 35% of the final converter volume.