The field of power electronics is growing rapidly in applications and technologies. Applications such as the grid, electric vehicles, and data centers are seeing an ever-expanding reliance on power electronics. To fulfill the increased performance demand of these applications, new technologies such as WBG devices and integrated magnetics have been developed to increase efficiency and power density. While new technologies provide advancement to the current state-of-the-art, further progressing the design of power converters requires early advanced simulation and optimization that can fully account for the higher frequencies, parasitic elements, and non-linear parameters of WBG devices. In the initial broad-scale steady-state design, many topologies, devices, and frequencies are modeled to reach the goal performance. The large scope in the early design state present too large of a problem for dedicated converter specific modeling. Commercial time-stepping power converter simulators are built to handle the initial large domain of parameters. However, time-stepping simulators are extremely time consuming, and it may take millions of iterations to converge to an optimal design. This research aims to assist the engineering intuition of early stage steady-state power converter design by providing a modeling and optimization framework that can more rapidly assess power converter designs. 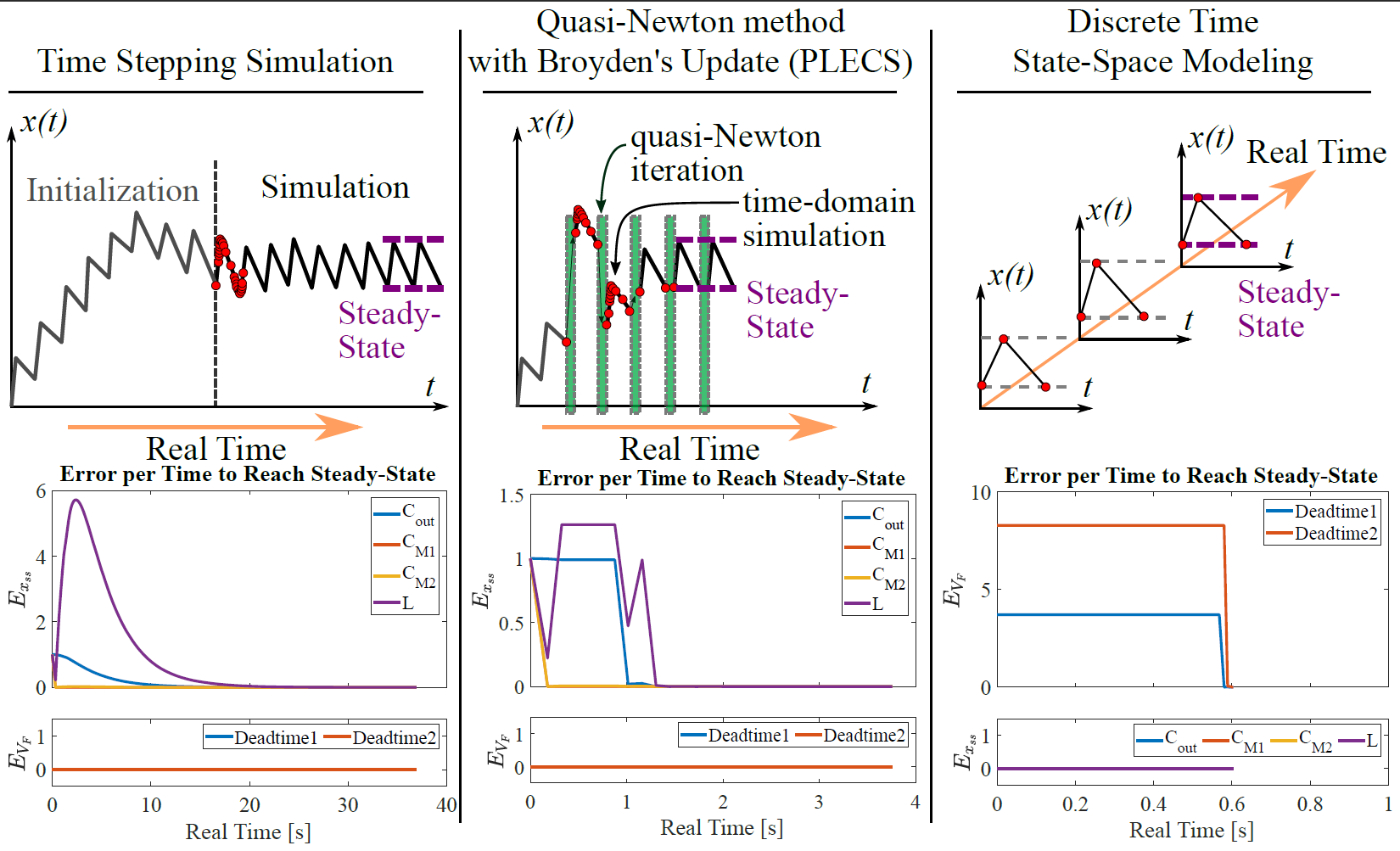 Comparison of broad-scale power converter modeling. A hard switched synchronous buck converter is used as an example to show the difference in error convergence to achieve steady-state waveforms with each method.

The goal of this project is to create a design framework to assist researchers in finding the optimal topology, operation, and device selection for an arbitrary set of design objectives. An important aspect of the framework is a database of components, such as inductors and FETs. While tabular data is already available for commercial devices, the parameters given are typically high-level and do not represent the losses or requirements to completely analyze a high frequency, power-dense circuit. An indexed standardized database containing curves and experimental data integrated into a modeling framework will allow broad analysis and comparisons of devices to occur rapidly.
Discrete time state-space modeling provides a generalized method to rapidly find the steady-state of switched circuits [1-3]. If a converter can be approximated as a linear equivalent circuit within each switching interval, it can be modeled using state-space equations. Iterating through the linear equivalent models captures the switching behavior of the converter. By solving the state-space equation over the set of linear equivalent circuits for a converter, the periodic steady-state solution is
$$ mathbf{x_{ss}}[n] = left(mathbf{I}-prod_{i=1}^ne^{mathbf{A}_it_i} ight)^{-1}left(sum_{i=1}^nleft(prod_{k=i+1}^ne^{mathbf{A}_kt_k} ight){mathbf{A}_i}^{-1}left(e^{mathbf{A}_it_i}-mathbf{I} ight)mathbf{B}_imathbf{u} ight) ~. $$
To solve for the steady-state of a circuit, each linear equivalent model and the transition time between linear equivalent models must be known. For active transitions caused by gate-controlled FETs, the timing can be easily determined. However, state dependent transitions such as diode conduction are unknown prior to solving the converter. This research has shown if states surrounding a diode conduction transition have nearly constant slopes, then the correct transitions can be derived by utilizing partial differential equations [3]. Current research hopes to better discern state dependent transitions without resorting to time-stepping simulation in any circuit. Future work will combine the standardized database with the discrete time state-space modeling method via an optimization process to create a design framework.

This research is heavily motivated by the rise of WBG devices and the need to construct better analysis and design techniques due to use of these devices. With the high frequency and efficiency typically associated with WBG device circuits, greater design stress is placed on the minute parasitic effects of the converter to further advance the state-of-the-art. With this design framework incorporating databases of components along with steady-state simulation and optimization techniques, the incorporation of WBG devices into the market can be further enhanced by faster, more accurate early-stage circuit designs.