This research focuses on building a rectifier compliant with the AirFuel Resonant wireless power transfer (WPT) protocol. This type of WPT can transfer power simultaneously to multiple devices from a single transmission pad. It also increases misalignment tolerance and charging distance, making WPT more intuitive for the end user. The rectifier is designed to be placed in a smartphone, tablet, watch, laptop, keyboard, etc., where each of these devices could charge (at various power levels) at the same time. This charging scheme boosts practical usability while maintaining (or improving) the electrical efficiency of the WPT system. 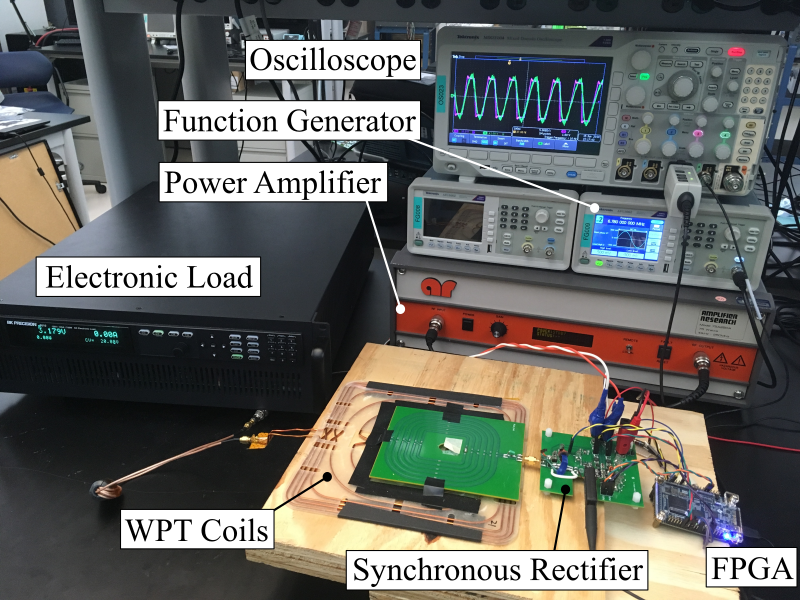 A rectifier is used to transform the AC signal of the WPT receiver coil into a DC signal in the device under charge. Essentially, the rectification stage enables the magnetic field (supplied by the transmitter) to be used to charge a battery in a mobile device. In this research, a synchronous rectifier is chosen and designed to use gallium nitride (GaN) switches and an inductor and capacitor (resonant tank), each in parallel with the rectifier's input. The resonant tank enables zero voltage switching (ZVS) in order to lower the power loss and raise power transfer efficiency.

For 6.78 MHz WPT systems, electromagnetic radiation is a potential problem. Generally, a multistage filter is used to remove harmonic distortion within the circuit waveforms. However, a better technique is to avoid creating harmonic distortion in the first place, and the solution presented in this research utilizes the resonant tank to elongate the ZVS transitions, thereby reducing the harmonic distortion generated by the circuit. Because the rectifier is actively switching, it is also possible to control the equivalent input phase of the rectifier. This is very useful in WPT charging (especially for multi-load WPT) because it allows the receiver to customize its load for optimizing the overall system efficiency. Overall, the rectifier researched here is a comprehensive solution that addresses many challenges for 6.78 MHz WPT systems, and eventually, makes WPT a little more intuitive for the end user.

The high switching frequency of this work (6.78 MHz) makes parasitic values, switching times, and transient non-linearities a more critical factor in correct operation. While the better figures of merit for switching time, on resistance, blocking voltage, and footprint area make GaN a better solution for this application, the real value lies elsewhere. The resonant tank capacitance of the circuit is in parallel with the output capacitance of the switches, effectively increasing the value of a parasitic element that already exists in the circuit. The output capacitance of a GaN device is, in general, less subject to change with drain-to-source voltage when compared to the output capacitance of a silicon device. This characteristic is beneficial for the synchronous rectifier because it means the resonant tank capacitance majorly holds its value throughout the resonant transition, something that could not be as easily stated for a silicon implementation.