In the last decade, the wireless power transfer (WPT) technology has been a popular topic in power electronics research and increasingly adopted by consumers. Several WPT standards are established to regulate wireless charging devices and ensure their interoperation across different products. The AirFuel standard utilizes resonant coils to transfer energy at 6.78 MHz, introducing many benefits such as longer charging distance, multi-device charging, and high power transfer efficiency. In recent studies, the active full-bridge rectifier is employed on the power receive unit (PRU) to improve the system efficiency because of its superior characteristics. However, the rectifier switch actions have to be synchronized with the magnetic field. In the literature, there are many solutions for synchronizing the rectifier, but most of them are bulky and not reliable, which is not suitable for a small PRU. Therefore, a frequency synchronous rectifier with an on-board control is proposed in this project. The rectifier power stage is designed to achieved full ZVS while delivering 40W to the load. Also, the synchronization control is accomplished and stabilized using an analog compensator, which eliminates the need for bulky control and external sensing hardware. The power stage and control network are implemented on the same board with a small footprint, allowing the PRU to be integrated into daily consumer electronics such as laptops and monitors. 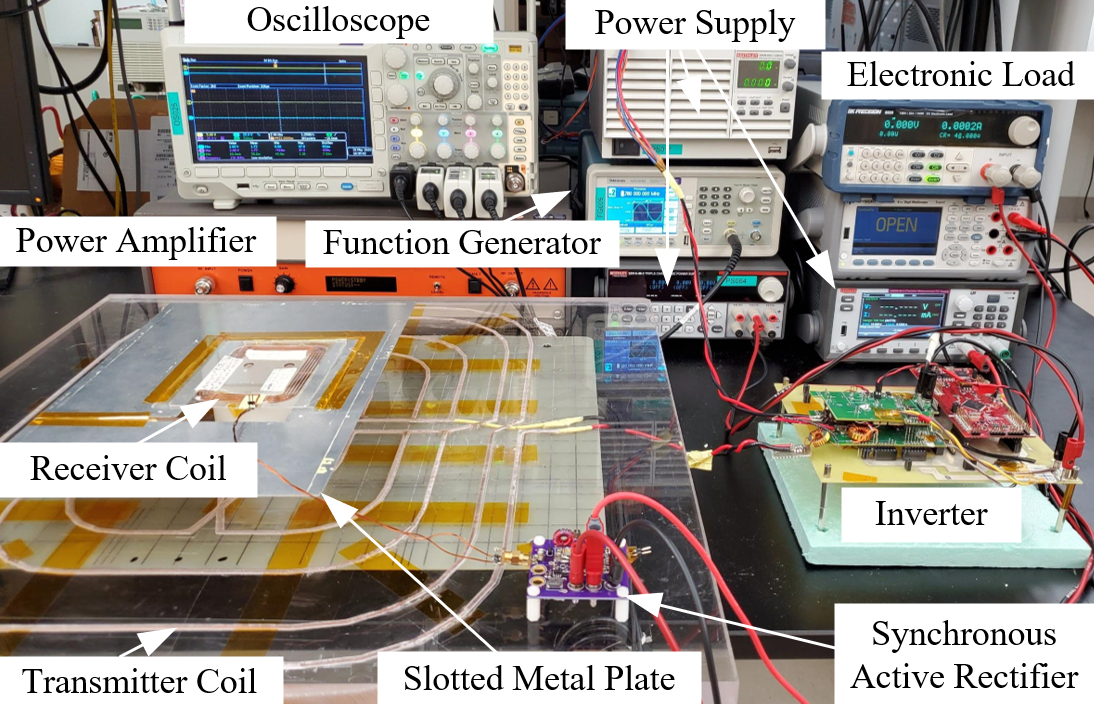 Using GaN FETs for switches allows the rectifier to operate at a high frequency of 6.78 MHz with minimal losses due to the absence of the instinct body diode and small parasitic capacitance Coss. Also, small Coss requires a small resonant tank inductance to achieve full ZVS. Furthermore, for switches with similar ratings, GaN FETs have a much smaller footprint, compared with silicon counterparts. As a result, the power receiving unit overall volume is reduced significantly, only about 10% of that of the previous attempt made by another student, enabling it to be integrated into consumer electronics, i.e., laptops and monitors.