To enable better voltage regulation in power systems with high penetration of photovoltaics (PV) and other distributed energy resources (DERs), inverters are now being required to provide reactive power support to the grid in addition to providing real power generated by PV panels. In order to provide support to the grid during contingency events, PV inverters and a centralized controller need to be able to coordinate with each other. Therefore, a framework for engaging the support from non-utility DER-based inverters and a centralized controller have to be designed and developed in order to integrate with the transactive energy approach to make both the customer and utility achieve benefits that meet their individual needs. 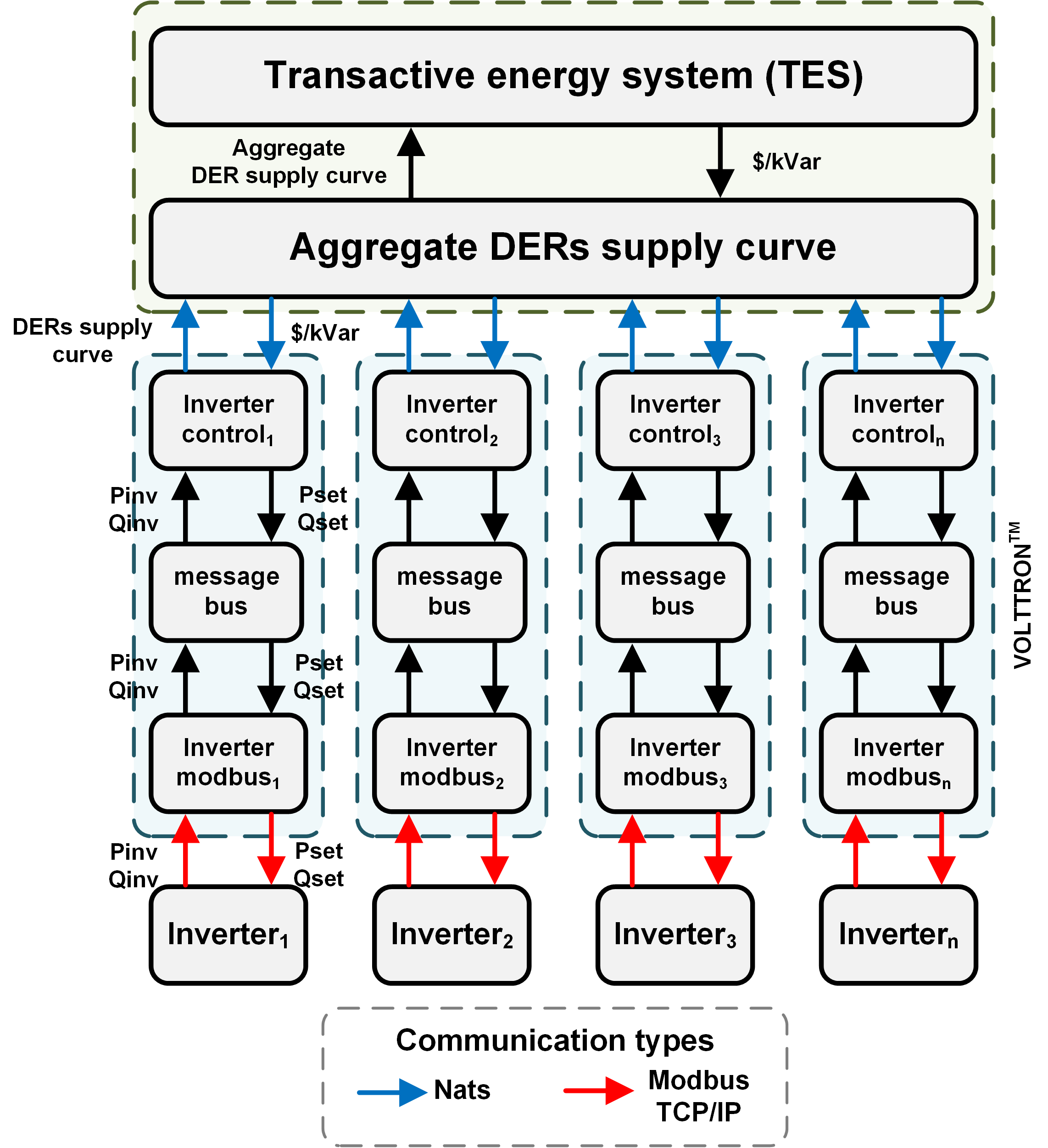 To be able to coordinate with centralized control system, an adapter for each platform is required. This project mainly focuses on controlling and monitoring real and reactive power of non-utility inverters owned by the customers. Enabling the voltage support from an inverter by integrating a transactive approach, VOLTTRONTM agents are developed to be a distributed controller for the non-utility inverter [1]. NATS is a publish and subscribe messaging system, and it has been used for the communication between the OpenFMB message bus and the outside platforms which enables peer to peer communication among the devices. Each device can receive data based on the subscription topics. This peer-to-peer idea reduces the latency of direct communication between a centralized controller and devices, which normally includes delay time. Two VOLTTRONTM agents are designed to complete specific tasks as follows.

The inverter modbus agent is developed to form the connection between the VOLTTRON platform and an inverter, which is using modbus TCP/IP for communication. The inverter parameters such as voltage, current, and power are read from modbus registers of the inverter. These data are published to the VOLTTRON message bus for the inverter control agent to subscribe these data and then uses these data to achieve other tasks, such as constructing a DERâ€™s supply curve and updating the inverter data into the OpenFMB module. The agent can also subscribe to the control signals from the message bus for setting new operating points, which are real and reactive power of the inverter.

Raspberry Pi with installed VOLTTRONTM agents is used for demonstration of this project. Each Raspberry Pi represents a distributed controller of each DER. After the transactive signal is sent by the TES for requesting the support from customers, multiple DERs will submit their own DERâ€™s supply curve for bidding. When the market is cleared, cleared price will be sent to each DER. Individual DER will dispatch the power based on its individual price curve to support reactive power for improving voltage in the system.

It is characteristic of WBG devices to enable higher efficiency, higher switching frequencies and provide better thermal properties compared to silicon. These can enhance the grid support ability of inverters by enabling faster response during contingency events. Moreover, WBG based inverters have higher efficiency resulting in higher power capability for providing grid support, with less losses compared to silicon based inverters. Additionaly, WBG based inverters can support for a longer period of time before reaching the temperature limits.