A SiC based reconfigurable integrated converter is developed to boost EV battery voltage during the traction operation and provide galvanic isolation during the charging operation. The integrated converter utilizes the existing battery management system (BMS) mechanical contactors for reconfiguration and does not require any extra mechanical or solid state contactors. Compared to tradition plugged in EV topology where powertrain converter and on-board charger are packaged separately, the reconfigurable integrated converter shares high power switches, magnetic core and winding, bulk capacitor, and heat sink. The size of the passive elements - inductor, transformer, and capacitor are also reduced due to SiC converter operation at high switching frequency at high efficiency. As a result, the converter cost, weight, and volume are reduced significantly. The saved space can be used for cargo space or larger battery pack. The light load efficiency of the boost converter is also improved by reconfiguring the integrated converter in DAB mode using a seamless transition algorithm. In this way, improved Miles per gallon gasoline equivalent (MPGe) can be achieved. 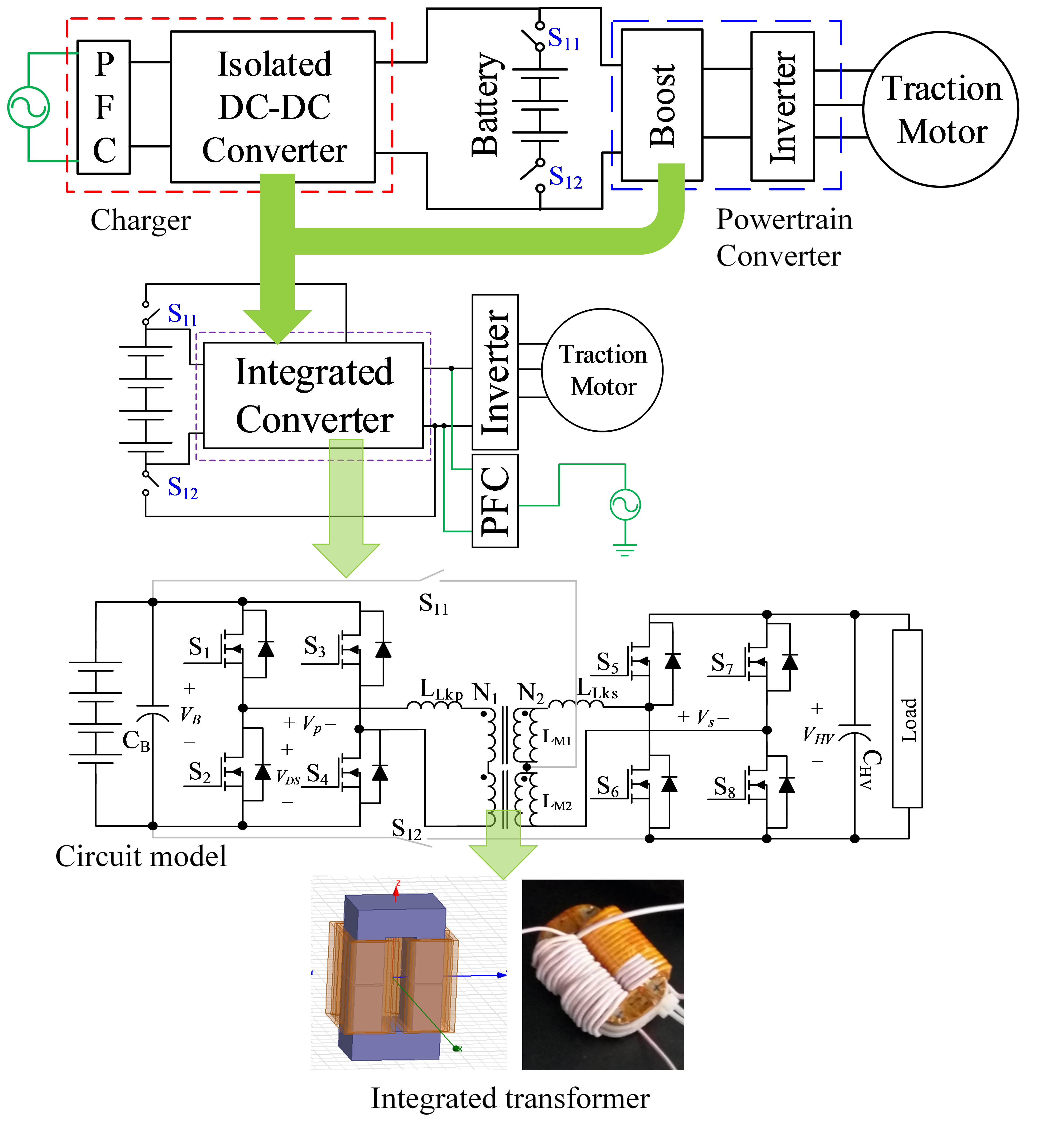 The objective of the research is to develop and optimize an integrated converter prototype for 50 kW traction operation as boost converter and 6.6 kW charging operation as dual active bridge (DAB) converter. A scaled down prototype is first developed to verify the reconfigurable integrated converter operation and loss verification. The boost converter is operated in current interleaving mode to reduce the capacitor requirement. Phase shift modulation is adopted for DAB converter. The unique aspect of the design is to incorporate a hybrid high frequency integrated magnetics which can be operated as DC boost inductor and AC isolation transformer for dual active bridge converter. The magnetizing inductance of the hybrid high frequency integrated transformer is used for boost operation and the leakage inductance is used for the DAB converter operation. A model for finite element analysis (FEA) is developed to evaluate the leakage and magnetizing inductance for different winding and core configurations. Based on the leakage and magnetizing inductance, an analytical converter model is developed to predict the transformer current waveforms and output power. To achieve the highest efficiency for different operating conditions, a loss model is developed for efficiency optimization.

Due to the bidirectional power flow capability of DAB converter, it can be operated in both charging operation and traction operation. Since the integrated converter can drive the traction motor as both boost and DAB mode, they are designed independently for highest efficiency at light load and full load condition. For most integrated converter topologies presented in literature, extra mechanical or solid-state contactor is required for reconfiguration which adds cost and increases the volume of the converter. In the proposed integrated converter, reconfiguration between DAB and boost mode is achieved by switching the BMS contactors which are already available in EVs. However, the time required to reconfigure the converter between boost and DAB modes are high due to the mechanical contactors. A trapezoidal modulation scheme is developed to ensure seamless power flow during the mechanical contactor transition time. The modulation scheme ensures the reliability of the BMS contactor and prevents overshoots. Using targeted design approach based on consumer driving habits and drive cycle statistics, the topology provides a unique way to design and optimize independently EV efficiency for different torque-speed requirement.

SiC based converters can be operated at higher switching frequency at high efficiency compared to traditional Si IGBT. The IGBT based traction boost converter is operated at relatively lower switching frequency compared to Si MOSFET based isolated DC-DC converter. It would not be practical to integrate the IGBT based boost stage with DAB stage due to poor efficiency during charging operation. By adopting the SiC devices, the boost stage can be switched at higher switching frequency with smaller sized boost inductor. As a result, light load efficiency improvement is achieved using the integrated converter during the traction operation. Since the turn-off loss is lower for SiC device, the system efficiency can be significantly improved by incorporating soft switching operation. SiC based converters also require less heat sink requirement due to high thermal conductivity and as a result the overall power electronics converter footprint can be reduced. The saved volume can be used for larger battery pack to increase the driving range of the electric vehicle. SiC devices are also essential for the next generation high voltage ultra-fast charging.